HIGHLIGHTS FROM THE SUSTAINABLE NEXT GENERATION INTERNET WEBINAR

On the 14th of April 2021, Digital4Planet (D4P) organized the Sustainable Next Generation Internet Horizon Europe webinar attracting over 50 attendees. The purpose of the event was to gather experts from the European Commission (EC), industry, and academia working on the transition toward a green and sustainable internet to discuss and identify research and innovation challenges, as well as funding opportunities in view of the upcoming Horizon Europe Calls. 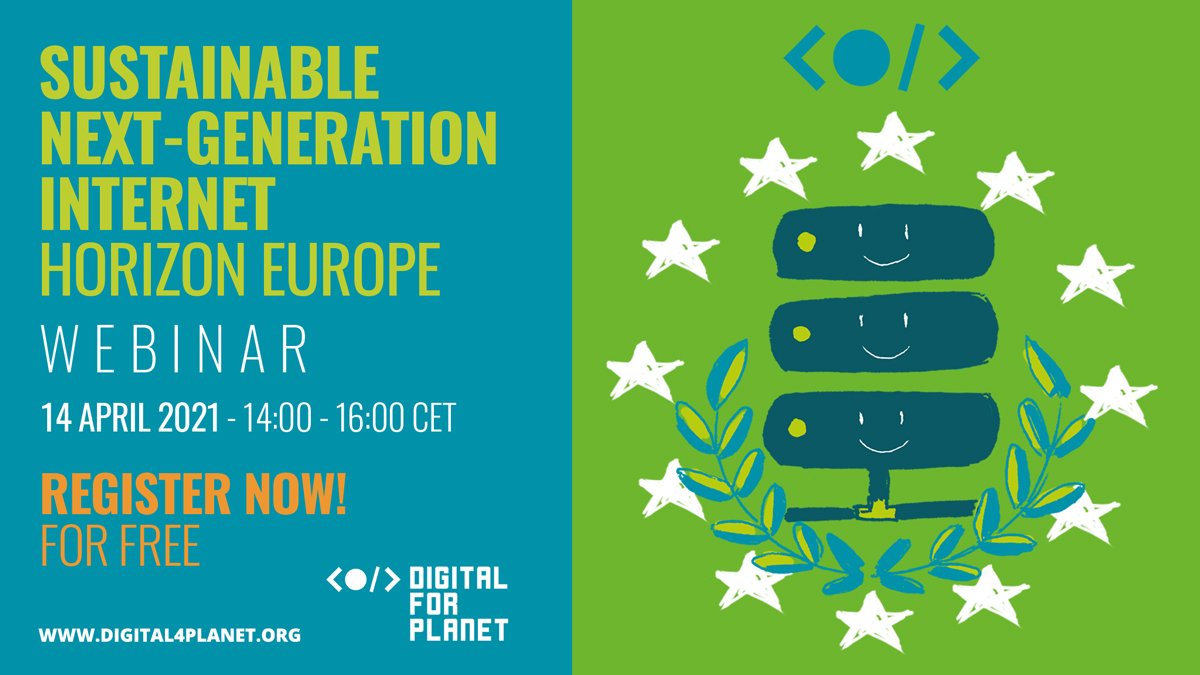 The webinar started with a warm welcome and an introduction to D4P given by Dr. Monique Calisti, the President of D4P and CEO of Martel Innovate.

Dr. Calisti and her team have been studying the impact of digital technologies on the environment for a while now. And although they believe in the enormous potential of the advancing technology, they are very much aware of the numerous risks and the negative impact the technology has on the environment. The ongoing digital transformation has undeniably brought many benefits and solutions that allow for more efficient use of resources, optimization of processes, environmental impact monitoring, among others. However, digital technologies and their overconsumption are a big part of the problem too. The production, use, and data transfer of digital devices cause more CO₂ emissions than one might expect. Dr. Calisti stressed out that the world’s e-waste amounted to 53.6 tonnes only in 2019 due to the new trend of replacing rather than repairing, which we owe mostly to software developments that are often not compatible with older devices, forcing consumers to buy new ones.

Dr. Calisti mentioned that the newly established, Swiss-based association spans across Europe with the potential of having a global reach with time. D4P has been created to promote awareness about digital habits and work as an aggregator of knowledge, experts, and tools to share know-how and materials developed by the community and not just the association. Another important aspect of D4P’s work will be helping researchers and innovators find public and private funding opportunities to minimize the gap and avoid widening inequality.

After the introduction, Dr. Calisti welcomed the first guest speaker, Dr. Ilias Iakovidis, the Adviser of Green Digital Transformation at the EC, who shared inspiring insights and introduced the European initiatives on digital sustainability topics.

Dr. Iakovidis started by saying that the EC’s green and digital strategies, that used to be separate for decades, are now joining hands and becoming the new pillars of the EC led by Dr. Ursula von der Leyen. He said that the topic has been gaining a lot of attention because of the European Green Deal initiative that proposes a growth strategy aiming to transform the EU into a modern, resource-efficient, and competitive economy. Dr. Iakovidis insisted that firstly “we need to get our house in order” in terms of services, applications, and above all, material consumption. He touched on what Dr. Calisti has mentioned in her introduction – the inefficiency of ICT caused by business models and consumer behavior that lead to huge amounts of e-waste. Dr. Iakovidis advocated for a small behavioral change that would make a tremendous difference – keeping the devices just for one year longer to reduce the production emissions.

Concluding his keynote address, Dr. Iakovidis emphasized the importance of responsible production and consumption, bringing an example of online shopping, which used to be green but recently became a large contributor to the CO₂ emissions because of heavily exploited return policies. He said that we must ensure that digitalization is done right and that people without the means are adequately supported.

The keynote speech was followed by a lively panel discussion of experts from the Polytechnic University of Catalonia, University of Zurich, KTH Royal Institute of Technology, the Swiss Federal Institute of Technology in Zurich, and the Green Web Foundation. The panelists discussed their views on the impact digital technologies have on the environment and shared what their organizations are doing to tackle the challenges. 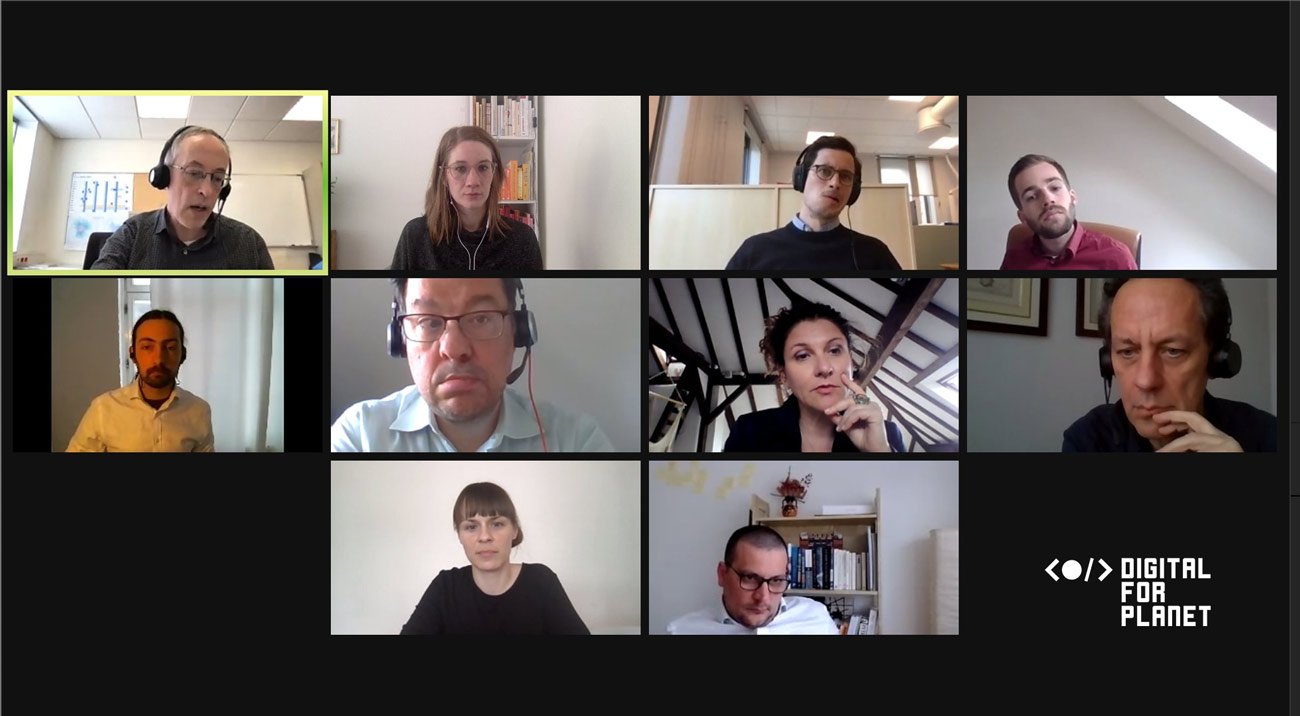 The panel was opened by Prof. Leandro Navarro, an activist and Professor at the Department of Computer Architecture at the Polytechnic University of Catalonia who presented the initiatives he has been involved in the last two decades. Among others, Prof. Navarro has been working on the circular economy of digital devices focusing on expanding the lifecycle of devices rather than recycling them.

The second panelist, Dr. Jan Bieser, a postdoctoral researcher at the University of Zurich and the KTH presented his work in the field of the environmental impact of technology where he is trying to understand and measure the footprint of ICT itself and of applying ICT in other sectors. Dr. Bieser talked about the direct and indirect effects of technology on the environment and shared an interesting finding that 2/3 of the CO₂ footprint of ICT in Switzerland stems from end-users. He also emphasizes what was said before by Dr. Iakovidis – that the majority of emissions come from device manufacturing production and not from using the devices.

Then, Dr. Vlad Coroamă, a lecturer and senior research associate at the Institute for Pervasive Computing at ETH talked about how digitalization can reduce emissions by showing an example of international conferences. He presented a graph with events hosted virtually versus physically that contributed to the reduction of emissions by eliminating the need for transcontinental travel. Dr. Coroamă has also brought up the fact that the internet still runs on fossil fuels and said that we need to transition towards green, open, lean, and distributed internet instead.

The presentation round continued and gave Simon Scherrer, a Ph.D. student at the Network Security Group at the ETH a chance to introduce his work on improving the security and performance of internet core network infrastructure and reducing its ecological footprint. Mr. Scherrer and his group are investigating two interesting questions – (1) how can green packet routing be implemented in practice and (2) what could be the extent of emission savings through green routing?

The floor has then been given to Chris Adams, one of the directors of the Green Web Foundation that tracks and accelerates the transition of the web to green energy. Mr. Adams started his presentation by pointing to the statistics on global data centers and their energy demands. He presented the significant changes that occurred in the last decade, which resulted in doubling the overall energy usage of data centers. He also touched on what Dr. Coroamă previously addressed – that the internet which is the biggest machine in the world runs mostly on fossil fuels. He stressed that we need greener material inputs, not just for running the devices but also to produce them.

The panel discussion has generated a lot of interest among the audience who continued asking insightful questions.

Dr. Calisti closed the webinar by saying, “there is so much alignment among our speakers.” She also stressed that beyond technical aspects, there are political, financial, social, and environmental incentives that need more clarification. Dr. Calisti has also shared relevant initiatives, such as the NGI Forum, and invited the participants to join forces with D4P on its journey toward digital sustainability.

To learn more about D4P Membership Program and the benefits of joining our association, please click here.

Decide which cookies you want to allow. You can change these settings at any time. However, this can result in some functions no longer being available. For information on deleting the cookies, please consult your browser’s help function. Learn more about the cookies we use.

With the slider, you can enable or disable different types of cookies: