As part of The European Green Week 2021, on June 3, 2021, Digital for Planet (D4P) organized “Towards Zero Pollution Communication Networks” webinar gathering top experts from industry and academia whose work focuses on research, development, and adoption of sustainable and pollution-free communication infrastructure. The webinar was live-streamed and generated a lot of interest among its participants. Due to its success and the importance of the discussed topics, the European Commission acknowledged and featured the event in its daily report – EU Green Week 2021 – DAY 4 ROUNDUP.

EU Green Week is an annual opportunity to debate and discuss the European environmental policy. Organized by the European Commission Directorate-General for Environment, this key event in the environment policy calendar attracts policymakers, academics, leading environmentalists, and other interested parties from across Europe and around the globe.

The 2021 edition of the EU Green Week took place from May 31 to June 4, with Partner Events taking place between May 3 and June 13. This edition has been dedicated to the “zero pollution ambition” providing a great opportunity for the European Commission to engage with all stakeholders, including citizens, and discuss how we can all work together to make this ambition a reality.

The webinar was opened by Dr. Monique Calisti, the President of D4P and CEO of Martel Innovate who gave a warm welcome and an introduction to D4P and the European Green Deal initiative. In her presentation, Dr. Calisti emphasized the potential and our ever-growing dependence on digital technologies and solutions that allow us to access essential services (e.g., health care, education), make more efficient use of scarce resources, optimize various processes, and monitor the environment. However, while acknowledging the enormous potential of advancing technology, Dr. Calisti has also brought attention to the negative impact digital technologies and their overconsumption have on the environment.

The production, use, and data transfer of digital devices cause more CO₂ emissions than one might expect – the estimates show that ICT could consume as much as 20% of total global electricity by 2025, generating 5.5% of the world’s CO₂. On the other hand, the world’s e-waste amounted to 53.6 tonnes in 2019, which can be attributed to the new trend of disposability and replacing devices rather than repairing them.

Secretary General at EMEA Satellite Operators Association (ESOA), which represents 22 satellite operators who operate in GEO-MEO-LEO orbits. After briefly introducing ESOA, Ms. Holla-Maini emphasized that zero-pollution is currently one of the biggest global challenges and moved on to presenting satellite technology as one of the solutions to environmental issues facing our planet. She mentioned that the role of satellite imagery to monitor large-scale changes to the planet as well as the role of satellite navigation to contribute to transport efficiency are quite well-known and understood. On the other hand, she stressed that the role of satellite communications is a lot less well-known but equally important. During her insightful presentation, Ms. Holla-Maini presented statistics and metrics related to satellite technology and provided several examples of how SatComs can support the industrial IoT environment and climate-change mitigation activities across various sectors, including energy, agriculture, and transportation.

Concluding her keynote address, Ms. Holla-Maini presented and emphasized the potential of satellite broadband, which can extend the reach of internet connectivity, enabling up to 50mbps in the EU with minimal environmental impact/energy consumption.

The keynote speech was followed by brief presentations and a panel discussion of experts from Syniverse, Transforma Insights, University of Bologna, and FIT Consulting. The panelists discussed their views on the impact digital technologies have on the environment and shared what their organizations are doing to tackle the challenges.

The presentation round was opened by Ms. Monique Morrow, Senior Distinguished Architect for Emerging Technologies at Syniverse. Ms. Morrow presented Syniverse’s sustainability program with its current sustainability goals, actions, and future initiatives, and stressed that the world depends more and more on companies to make sustainable choices. “Sustainability and implementing green whether in computing, buildings, water management, circularity are core to Syniverse’s values as a company. We are honored to have participated in the Digital for the Planet Webinar towards Zero Pollution Communications Networks as we believe there is still a lot of good work ahead of us all,” said Ms. Morrow.

The second panelist, Mr. Jim Morrish, Transforma Insights’ Founding Partner spoke about the electricity and fuel impact of new emerging technologies (e.g., IoT, AI) on sustainability, highlighting the key numbers from the research he and his team conducted. The overall conclusion drawn from their studies is that the new technologies save more electricity, fuel, and water than they use (with the exception of Blockchain). During his presentation, Mr. Morrish also looked at sustainability from the perspective of a communications network, outlining the various actions that could be taken (e.g., implementing AI to redact traffic or to increase efficiency of data centers’ cooling). “Effectively managing the pollution generated by communications networks is crucial, and there’s a lot that can be done to reduce the sustainability footprint of communications, starting with devices but also including access networks, and extending right to core network capabilities and data servers,” he said, adding that “it will be critical to do this in a way that does not prejudice the environmental benefits that can be secured through use of communications: in many instances, particularly involving AI and IoT, increasing loads on communications networks can result in real world electricity and fuel savings through increased efficiencies.” Mr. Morrish concluded his presentation by saying that “aiming for zero-pollution communication networks is a good thing but that this goal needs to be analysed in context.”

The presentation round continued and gave Prof. Alessandro Vanelli Coralli from the Department of Electrical, Electronic, and Information Engineering “Guglielmo Marconi” at the University of Bologna a chance to dive deeper into SatComs’ potential. Prof. Vanelli Coralli presented the indirect and direct impact of 5G/6G on the environment and the non-terrestrial networks’ (NTN) role within this context. He emphasized that NTN will play a fundamental role in reducing the environmental impact of 5G/6G due to infrastructure optimization, the optimization of traffic delivery, as well as limited direct impact of the NTN component. Prof. Vanelli Coralli also stressed that more studies on indirect and direct impact are needed in order to further reduce modem energy consumption and evaluate the life cycle assessment of NTN based on multiple constellations.

The floor has then been given to Mr. Fabio Cartolano, Innovation Manager at FIT Consulting who spoke about the opportunities and challenges of the Fourth Industrial Revolution from the transport and logistics perspective. During his presentation, Mr. Cartolano stressed out that sustainability and the response to new challenges should not be solely about setting and reaching the KPIs but also about broader aspects, such as social equality. 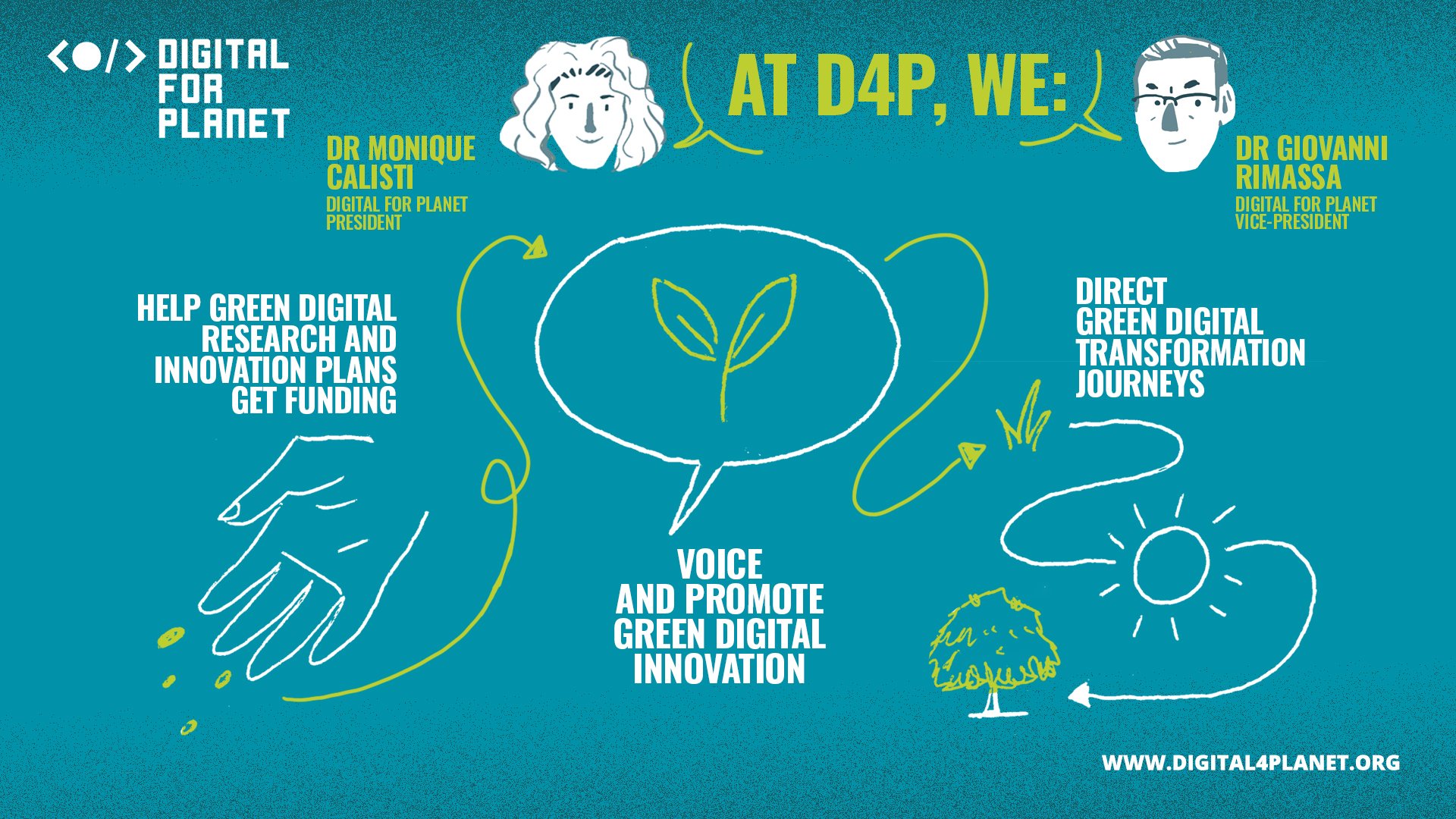 After the panel discussion, Dr. Giovanni Rimassa, Vice President of D4P and Chief Innovation Officer of Martel Innovate, introduced the Towards Zero Pollution Communication Networks Working Group and presented its active goals and planned activities, tightly aligned with the European Green Deal’s objectives. Concluding his presentation, Dr. Rimassa emphasized the potential and importance of the ‘multifactor’ approach and invited speakers and attendees to join the initiative toward a collective green digital transformation. To learn more about the D4P Membership Program and the benefits of joining the association, click here.

Decide which cookies you want to allow. You can change these settings at any time. However, this can result in some functions no longer being available. For information on deleting the cookies, please consult your browser’s help function. Learn more about the cookies we use.

With the slider, you can enable or disable different types of cookies: